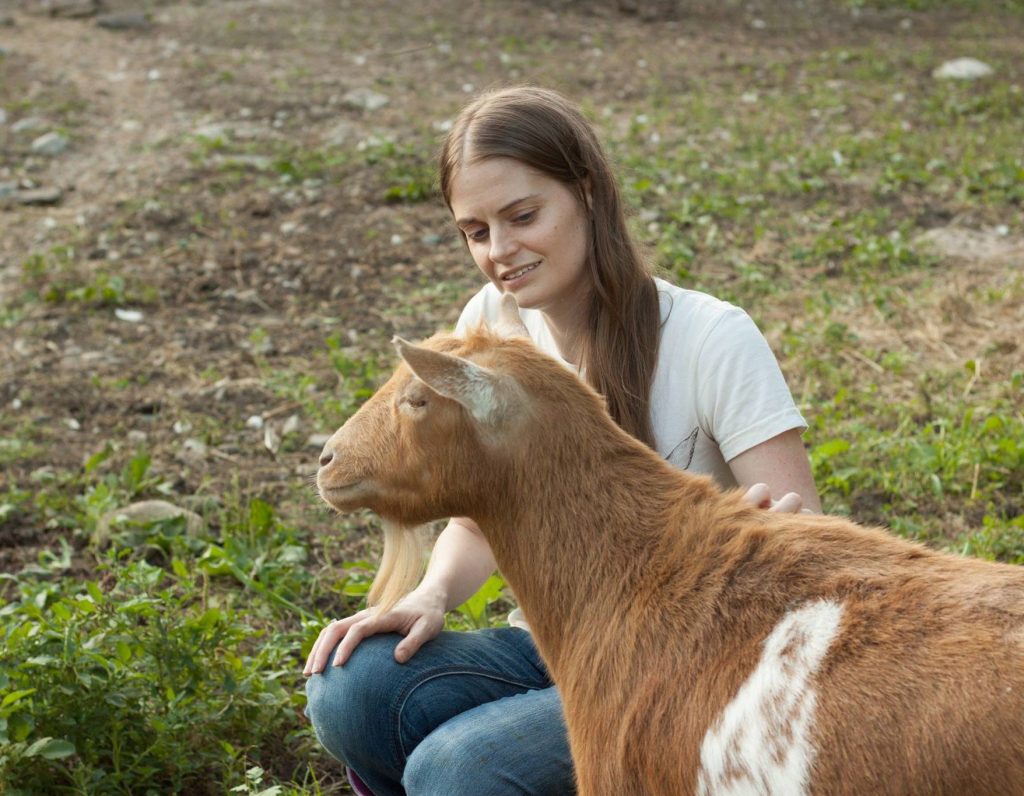 Jen Wyglinski proves how essential volunteers are to nonprofits. A freelance writer whose first job was with an international animal welfare group, Jen has been interested in animal welfare and rights for as long as she can remember. When she moved to central Massachusetts, she wanted to get involved with a farm animal sanctuary, and found Maple Farm Sanctuary. She started attending meetings six years ago, worked up to a larger volunteer role, and currently runs all of MFS’s communications; including their fundraising, website, and newsletter.

How did Maple Farm Sanctuary start?

We have a really interesting and inspiring origin story. The sanctuary was started by a married couple, Cheri Ezell-Vandersluis and Jim Vandersluis. Jim is a third-generation dairy farmer, and Cheri was working as a goat milk farmer when they met. They farmed animals for a couple of years before having a complete change of heart. They couldn’t stand to see what happened to animals in the farming industry. In the dairy industry, in particular, baby cows and goats are taken from their mothers right after birth. Cheri and Jim realized they wanted to save animals instead of exploiting them. It took a couple more years, but they turned their property into a sanctuary for animals.

What is the mission of Maple Farm Sanctuary?

Maple Farm Sanctuary is a nonprofit organization that provides a safe and lifelong home to abused, abandoned, and unwanted farmed animals while also promoting veganism and respect for all life through public education and outreach.

What has been the organization’s greatest obstacle?

That’s a really good question. We’ve had a lot of challenges. On the one hand, raising money for farm animal sanctuaries is not that hard because you have a really good subject. Of course, the difficult part is the fact that farm animals have a huge amount of expenses. Getting our fundraising program in place was a challenge, but it’s one of the areas where we now show a lot of success. We’ve worked really hard to build it up. We’ve worked really hard to get our name out there and people are starting to know us. We run a big annual campaign, and we have a number of events throughout the year. We also have a lot of success with our tour program, which brings visitors to the farm every weekend from May through November. We regularly sell out for every tour that we run during that time.

It sounds like you do a lot of community engagement and outreach.

Definitely. My background is in donor communications and stewardship, so we work hard to make our donors feel appreciated. We have a good thank you process in place, and we regularly communicate with our donors.  We value them and want them to know that.

How do you use Network for Good’s fundraising software?

Network for Good’s fundraising software has been a huge help to us. We used to have a basic database program that wasn’t easy to use. I couldn’t do a lot of tasks on my own, and actually needed to consult my sister, who’s a database expert. Part of the reason why we switched to Network for Good is because of how user-friendly it is. I’m not only been able to do my work, but I’ve learned about running a database by using it. We love the email platform, which is not something we had before. It makes it easy to communicate with our donors on a regular basis. The donation pages allow us to create good-looking appeals and run our event tickets directly through the fundraising software.

How often do you email supporters?

Our supporters receive up to three emails per month, depending on what’s going on. We send out a monthly newsletter, six or seven fundraising appeals over the course of the year, plus any events we need to promote.  We also use the fundraising software to email people within a couple of days after they take a tour, inviting them to complete a survey about their experience. We use it as a stewardship mechanism, but also as a way to get feedback and improve our tours.

How did the “three little pigs”—Chester, Harriet, and Jack—come to MFS?

We first found out about the pigs much the same way we find out about our other animals, which is through a phone call asking for help. This was actually two separate rescues, so two calls from different people around the same time. In both cases, it was the owners who could no longer take care of the pigs. Breeders tell people that potbellied pigs are only going to grow to a small size, but that’s a complete lie. So people buy them thinking they’re going to be this great little house pet, and when the pigs get big they can no longer take care of them or house them. We receive calls to take potbellied pigs almost weekly.

In this case, Jack and Harriet came together, and then a couple of days later, Chester arrived. Luckily we were able to put all three pigs together, and give them all a home.

The “Three Little Pigs” appeal was launched in order to create a dedicated space for them. We set a specific goal for the cost of materials and asked for donations to help fix up an old shelter we had, as well as build a gated enclosure for them.

And how are the pigs doing?

They’re great! It’s taken a little longer than anticipated to fix up the new area, but we’re in the process of completing it. In the meantime, the pigs have a comfortable area where they all live together, and get plenty of air. We’re looking forward to moving them to an area where they have more outdoor access and tour guests can interact with them because they’re very friendly.

They have very distinct, unique personalities. You quickly learn who is who. Harriet sits on command, like a dog. Jack can be a bit of a funny grouch; especially when people try to pet him, something most pigs love. Chester is the only one of the three with tusks, but he’s so gentle he never wants to use them.

Once in a while, when we have a small tour, we’ll let them roam around, but they come right back when we call them. We hope to have their new area finished in the next couple of weeks. And we’ll definitely be updating all of our donors and make sure they see the new home they funded.

What’s next for Maple Farm Sanctuary?

We have an amazingly supportive community. We have volunteers who come every week and do heavy-duty farm chores. They’re really the reason we’re able to keep running.  We’re currently in the process of implementing a better volunteer management program. The first step is putting all of our volunteers’ information in our fundraising software. We recently used one of the forms in the fundraising software to update our volunteer applications and that’s worked great. We now have all the information right there.